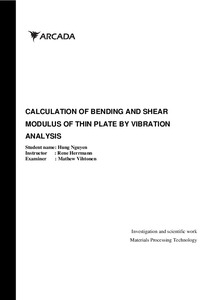 The thesis aims to verify the possibility of applying vibrational measuring method on thin plate made of light-weighed material. Particularly, it aims to develop formula for the calculation of dynamic shear and bending modulus for light-weighed material with such method. This method has been proven and being applied on heavy-weighed material such as metals and alloy based on standard ASTM E1876-15 which is explained in the Literature review part.

In ASTM E1876 method, the vibration of the specimen is caused by knocking a hammer on a metal plate placed upon two supports. However, this experiment is not possible to produce with light weighed materials as they will fly off the support. Therefore, the possibility of performing vibrational measuring method on light weighed materials needs to be testified.

In order for the method to be proven reliable, it needs to be supported by both theory, simulation and practical experiments. The theory is developed based on already existed theory of the same method on high density material; and the simulation is complemented with COMSOL multiphysics. The practical experiments are planned and done according to the availability of the equipment at Arcada’s laboratory. There is a small part of experiment remained undone due to technical issue. However, detailed set up of the apparatus for the experiment is well provided along with some alternatives in case failure occurs.

After studying the matter at many particular cases and different points of view, it is concluded that the method is applicable for the purposed material. In other words, it provides an alternative for standard ASTM E 1876-15 suitable for low density material.

The study of the thesis proves that Cantilever beam vibration has a known solution and easily be done on light weighed material when the specimen is clamped properly.

COMSOL software used as Finite Element Method helps not only to verify theoretical formulas, but also to develop a formula for calculating the frequency of the torsional vibration of a thin beam hinged at both ends
f_t=0,5√(JG/(LI_L ))