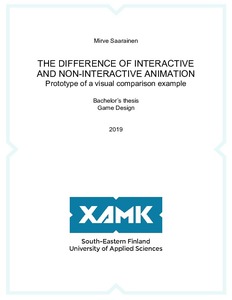 Saarainen, Mirve
All rights reserved. This publication is copyrighted. You may download, display and print it for Your own personal use. Commercial use is prohibited.
Näytä kaikki kuvailutiedot
Julkaisun pysyvä osoite on
http://urn.fi/URN:NBN:fi:amk-201905017090

The objective of the thesis was to find the differences of interactive and non-interactive animation. The study covered the 12 principles of traditional animation and what new aspects need to be considered when making animations for games. The aim of the study was to produce a prototype that shows the differences with visual aid.

The information was gathered by analyzing literature and online content. Various tutorials and blogposts made by professionals of the field were studied, and some character animations in games were analyzed. The study was product, prototype, and research oriented.

The study showed that game animations use the 12 principles of animation, but in varying amounts and ways. The main goal of the study was reached, and a video of a prototype showing the differences by comparing animations side by side was made.