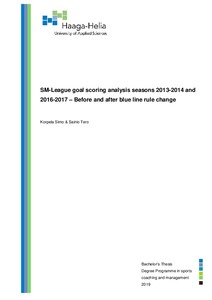 
Korpela, Simo
Sainio, Tero
All rights reserved. This publication is copyrighted. You may download, display and print it for Your own personal use. Commercial use is prohibited.
Näytä kaikki kuvailutiedot
Julkaisun pysyvä osoite on
https://urn.fi/URN:NBN:fi:amk-201905027239

This bachelor thesis is a research-orientated study of goal scoring in Finnish SM-League from season 2013-2014 and season 2016-2017. Objective is to find out how goal scoring has developed between the two season and, find out what kind of an effect IIHF’s blue line rule change had in goal scoring.

This report includes theory part, with general information of game of ice hockey, analysing background of Finnish SM-League scoring and short introduction to Finnish SM-League and to International Ice Hockey Federations rule change of blue line placement. The practical section is made of introduction to the analysing tool, which has been used during this study and of data collection, how it was collected, who collected and why it was collected in first place. The analysing part includes answer to research questions and opening of all the data that was collected during season 2013-2014 and season 2016-2017.

Results answered to three research questions. How many goals were scored during season 2013-14 compared to 2016-2017 season in different scoring categories, what are the differences in scoring between the season 2013-14 and 2016-17 and what was the effect of the IIHF rule change in scoring between the seasons 2013-2014 and 2016-2017? It was found in results that scoring had changed almost in every analysing category, and the biggest differences was found in offensive end zone goal scoring with enormous increase of goal amounts and in turnover goal scoring with moderate decrease of goal amounts. Results showed that IIHF rule change influenced goal scoring in Finnish SM-League, not by increase of amounts of goals, but with larger number of goals scored after offensive end zone play.