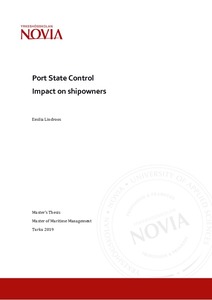 Lindroos, Emilia
All rights reserved. This publication is copyrighted. You may download, display and print it for Your own personal use. Commercial use is prohibited.
Näytä kaikki kuvailutiedot
Julkaisun pysyvä osoite on
https://urn.fi/URN:NBN:fi:amk-201905057614

This thesis discusses if corruption and power abuse are present during Port State Control
within the Paris and Tokyo MOU. The thesis also looks into how the shipowners
experience the Port State Control inspections and their regime. The research has mainly
been conducted through interviewing shipowners who represent 809 cargo vessels.
Statistics concerning conducted inspections and their inspection result have been used
during the research process.
The research indicates that the Port State Control abuse and corruption have decreased,
however, many cases were brought up during the interviews which indicate that abuse
and corruption are still present in both Tokyo and Paris MOU. There were also concerns
that Port State Control in some cases is used for political interests.
During the research process and in this thesis the concern about the shipowners’ strained
situation has been discussed. It has become evident that shipowners have very limited
possibilities to get redress for unjustified detentions.
Unjustified detentions often cause major economic losses in form of “off-hire”, lost
clients and over all company reputation. The shipowners also suffer from downgrading
within the MOUs’ ranking systems, which will lead to a reduced inspection interval. The
thesis has also looked into how effective the MOUs’ procedures are and how they serve
the shipowners’ interests.
During the interviews the shipowners have given their perception views on how the Port
State Control regime is performing and examples on how corruption and abuse are
present in the modern shipping industry.