Learning from Excellence in Health Care : A Qualitative Study on Excellent Practice 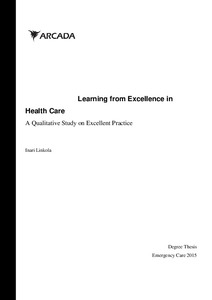 Linkola, Inari
All rights reserved. This publication is copyrighted. You may download, display and print it for Your own personal use. Commercial use is prohibited.
Näytä kaikki kuvailutiedot
Julkaisun pysyvä osoite on
http://urn.fi/URN:NBN:fi:amk-201905067889

Traditionally, developing patient safety concentrates on pointing out the errors, like incident reporting. Though, one can learn not only from mistakes but also success. Things also tend to success significantly more often than they would go wrong.
The purpose for this study is to show success in health care settings and to gain information for improving patient safety. 100 Learning from Excellence reports were analysed for this qualitative study. In the reports is discussed situations that ended up well according to the health care workers. The reports, as a material for this study, are received from a rescue department in Finland and a hospital in Great Britain. This research aims to answer the questions: ‘What are the matters that result in success along health care workers in rescue department in Finland and hospital in Great Britain?’ and ‘Do the results differ between the two separate departments?’ The material was analysed with inductive methods and a frequency was calculated to answer better the second research question.
As a theoretical framework is used a novel approach to safety, according to which the focus in improving safety should be set on every day’s success instead of mistakes. In the centre of the theory are humans and their adjustments in varying conditions.
As a results of the analysis was found four abstracts called collaboration, communication, workmanship and attitude. These abstracts can be considered as main themes in the reports from both of the health care settings. The results present one perspective for understanding the success as part of safety development.