Principles of the visual novel genre and their practical execution 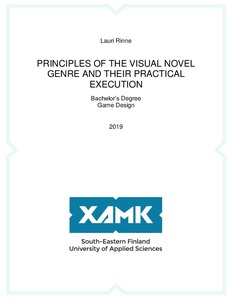 Rinne, Lauri
All rights reserved. This publication is copyrighted. You may download, display and print it for Your own personal use. Commercial use is prohibited.
Näytä kaikki kuvailutiedot
Julkaisun pysyvä osoite on
http://urn.fi/URN:NBN:fi:amk-201905067805

The objective of this thesis was the video game genre of “visual novels” as well as how their principles are learned and put into practice. Extensive research of the genre was used through articles, studies and the games themselves for the purpose of analytically separating visual novels from other video game genres and studying their differences for assistance during the development of said visual novels.

After the research was finished, the author then worked together with his classmates Samneang Peo and Nam-Anh Lê to design, draft and develop a playable build of an original visual novel which used knowledge about the aforementioned principles to create an experience that is authentic as possible and that would function as intended. The game engine Construct 2 was used for the project partition of the study.

This then led into a short discussion about whether or not the process was as difficult as expected and why / why not as well as anything that the author learned throughout the study that is worth recognizing. The author was confident that the information offered in the study as well as the showcase of its practical results would help other developers to get familiar with the visual novel genre and learn the basics of how they are designed and built.