Level flow and player guidance in a 3D multiplayer level 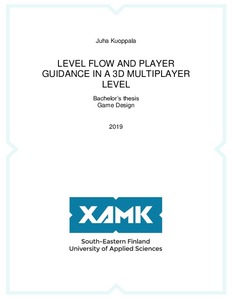 Kuoppala, Juha
All rights reserved. This publication is copyrighted. You may download, display and print it for Your own personal use. Commercial use is prohibited.
Näytä kaikki kuvailutiedot
Julkaisun pysyvä osoite on
https://urn.fi/URN:NBN:fi:amk-201905067802

The aim of this study was to analyse the effectiveness of both direct and indirect player guidance methods in achieving an optimal level flow in a 3D multiplayer level and how these methods should be used in practice. The goal with the thesis level design project was to design a level with minimal problems in the flow. The thesis level design project was to serve as an example of how well the methods perform in practice.

The study showed that the different methods of player guidance analysed, evaluated and put into practice performed well and allowed for a smooth and unhindered flow in the level. The goal of the thesis project was achieved and proven in playtests in the later versions of the level. The level also gained popularity with both casual and competitive players of the game it was designed for.