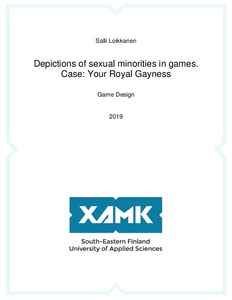 The purpose of this thesis was to examine how sexual minorities are represented in video games and compare those depictions with the characters in Your Royal Gayness, a kingdom management game released by Lizard Hazard Games in early 2018. Additionally, the study examined and evaluated the processes used to design the characters, stories and game mechanics in relation to LGBT issues.

The goal was to gain a deeper understanding on how to design and implement interesting and well-rounded LGBT characters and examine the state of LGBT portrayals in games. To understand the subject in a larger context, the history of queer video game characters was discussed briefly. Due to many of the game releases originating from Japan or the United States, the differences between the LGBT depictions of both countries were compared and assessed.

The creation process of Your Royal Gayness was introduced. Special focus was given to character design over other aspects such as world design or game mechanics, as the focus of the thesis was on sexual minorities. Different methods of creating diverse characters were identified and character design was explored through examples from the game.

Finally, the contents of the whole thesis were summarized and analyzed to provide insight into the best practices to create an LGBT friendly game.