Rusher – Creating an Enemy Design for a Game 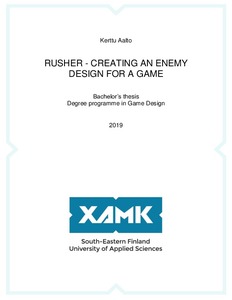 Aalto, Kerttu
All rights reserved. This publication is copyrighted. You may download, display and print it for Your own personal use. Commercial use is prohibited.
Näytä kaikki kuvailutiedot
Julkaisun pysyvä osoite on
http://urn.fi/URN:NBN:fi:amk-201905078077

The main purpose and objective of this thesis is to create an enemy design for a game project. It will go through the process of creating a 3D-model of an enemy called “The Rusher” for post-apocalyptic First Person Shooter game developed by Joensuu Games OSK.

The thesis includes discriptions of all necessary phases of character design for the particular enemy; concept art, modeling, sculpting, retopology, fur and import.

The first part of the thesis consists of introduction, which is followed by a short synopsis of types of enemies in games. The second part starts with reference materials, concept art and the modeling process, followed by sculpting and unwrapping. The last part is about creating a fur and importing the model to game engine.

The thesis was described and demonstrated with pictures of the work phases from the different programs used during the process.

The conclusion of the thesis is fully modeled, animation-ready enemy design that can be imported to the game and create a consistent description of the workflow for creating 3D-models of game characters.