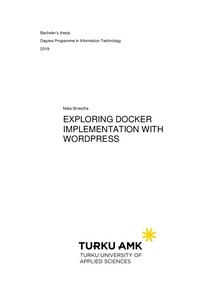 Shrestha, Mala
All rights reserved. This publication is copyrighted. You may download, display and print it for Your own personal use. Commercial use is prohibited.
Näytä kaikki kuvailutiedot
Julkaisun pysyvä osoite on
http://urn.fi/URN:NBN:fi:amk-201905078024

The aim of the thesis was to gain hands on experience on software containerization by exploring an open source software development platform, Docker and its implementation with a use case: WordPress.


The theoretical part of this thesis highlights the important concepts of containerization, some core components of Docker and the reason behind the usage of Docker as a popular platform. Similarly, a short overview of WordPress was given along with the explanation of WordPress image workflow with Docker.


The practical part of the thesis deals with the implementation processes. The testing was done in Windows operating system which included the installation of Docker in the beginning phase and implementation with WordPress in the later.

As a result, Docker was successfully installed. However, some errors were encountered during the installation process, which was solved with the help of available references and online materials. Thereafter, the implementation with WordPress was successfully done. The objective of learning about containerization with Docker was met.

The result was a useful experience of creating a container using one of the growing technologies: Docker, which is beneficial for both developers and system administrators to build, test and deploy applications quickly.