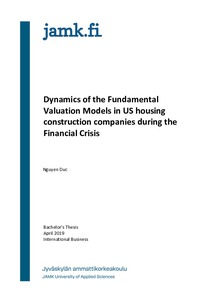 Nguyen, Duc
All rights reserved. This publication is copyrighted. You may download, display and print it for Your own personal use. Commercial use is prohibited.
Näytä kaikki kuvailutiedot
Julkaisun pysyvä osoite on
http://urn.fi/URN:NBN:fi:amk-201905098559

Fundamental equity valuation has been prevalent in today’s financial world, especially when stock investment is heavily noticed. Nonetheless, it is not suggested to apply fundamental valuation during unstable periods since the accounting data of firms are negatively fluctuating. It is nearly infeasible to capture relevant value estimates when the historical performance is erratic. The aim of this methodology-based study was to examine four models: Dividend Discount Model (DDM), Discounted Cash Flows (DCF), Residual Income Valuation (RIV) and Abnormal Earnings Growth Model (AEG) regarding their accuracy in explaining the market price. The methods assembled historical data of US house builders around the time frame of the 2008 Financial Crisis, divided into three investigation sub-periods: pre-crisis, crisis and post-crisis to clarify how the selected time frames impact valuation results.
The initial data set obtained was the pricing error (PE) of each stock. Subsequently, the one-way ANOVA test was conducted to examine the similarities among models in terms of statistical analysis and conclude whether the variations are statistically significant. Regarding the accuracy and reliability of valuation, the mean, median, standard deviation and coefficient of PE values were attained and compared among models.
The results indicated that most of the observations were overvalued with very inconsistent PE value distribution. Especially during the crisis period, the stocks delivered poorer performance in explaining trading price compared to the pre and post-crisis. The ANOVA test failed to reject the null hypothesis, which meant there were no statistically significant differences in means among models. RIV was considered to be the most reflective valuation method to the market, AEG came in second, DDM third, and DCF showed the poorest market explanatory power.