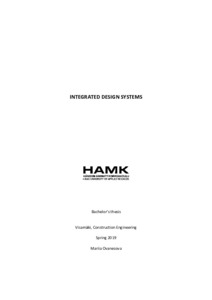 Ovanesova, Mariia
All rights reserved. This publication is copyrighted. You may download, display and print it for Your own personal use. Commercial use is prohibited.
Näytä kaikki kuvailutiedot
Julkaisun pysyvä osoite on
https://urn.fi/URN:NBN:fi:amk-201905098497

The purpose of this Bachelor`s thesis was to conduct an investigation of integrated design systems implemented in the structural design. Since the topic is large, the focus of the research was on data exchange between Tekla Structures and RFEM. For the start, the investigation about integrated design was held to familiarize with the topic, outline the reasons to use such systems and define the main problems making the application of the software connecting tools risky and unstable. Three methods were considered to adjust the integration – “Direct data exchange” option in RFEM, “Analysis and Design” model” option in Tekla Structures, and separate program called “Rhinoceros” with add-on module called “Grasshopper”. It was concluded that the last method is the most advantageous. Moreover, since the research was conducted under the supervision of the company AINS Group, the existing tools developed by the company to set connections between software (Tekla Structures, Grasshopper and RFEM) was allowed to be used.
During the practical part, the data exchange between the programs was done using the example model represented by a steel frame. The original structure was modelled in Tekla. Then, all elements from Tekla as one input were transferred to Grasshopper, where the necessary modifications were completed. In order to bring the modifications to the automatic level, additional tools were developed as Grasshopper components assigning buckling lengths, creating rigid links, converting profile names etc. The tools were created in Grasshopper with the help of algorithms. The received model was imported to RFEM, where it appeared with correct properties.
In conclusion, the approach of integrated design simplifies the structural analysis and geometry modelling. The connection of models from Tekla Structures and RFEM via Rhinoceros with Grasshopper gave the most appropriate results among other methods. However, this method still should be improved and checked in real projects.