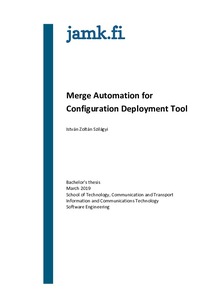 Szilagyi, Istvan Zoltan
All rights reserved. This publication is copyrighted. You may download, display and print it for Your own personal use. Commercial use is prohibited.
Näytä kaikki kuvailutiedot
Julkaisun pysyvä osoite on
http://urn.fi/URN:NBN:fi:amk-201905078087

Abstract
There was a need for a solution to solve invalid merge conflicts. The configuration
deployment tool was the root cause of these conflicts due to different integrations with the
system. This sole issue caused many difficulties and a desire for a solution. One solution to
this issue is provided in this paper.
The task was to research the conflicting files generated by the configuration deployment
tool and to find a solution or create one if possible. Thus, the objective was to find out if the
mentioned issues could be solved.
The implementation method included XML and Java language as well as three different
frameworks. The used frameworks were JGit, DOM, and XPath. JGit provided the base for
creating the basic Git functionalities. DOM provided the functions to manipulate the XML
files and XPath provided the functions to advanced search functionalities.
The study resulted in two separate Jar files which hold the created codes. The first Jar file
holds the XML parsing, sorting, formatting and whitespace removal codes. The second jar
file holds the codes for the JGit implementation that provided the Git functionalities.
The outcome of the created program was successful. The invalid merge conflicts caused by
the random XML file element orders, and white space values were solved by the created
codes. However, the valid merge conflicts are not handled automatically since they are
error prone to changes.