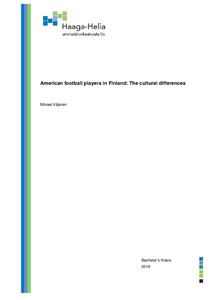 Viljanen, Mikael
All rights reserved. This publication is copyrighted. You may download, display and print it for Your own personal use. Commercial use is prohibited.
Näytä kaikki kuvailutiedot
Julkaisun pysyvä osoite on
https://urn.fi/URN:NBN:fi:amk-201905098566

This thesis was conducted between October 2018 and April 2019. The writer is a Bachelor’s of Business Administrations student, specializing in International Business. The writer has over eight years of experience in American football, five of these years playing in a multi-cultural American football team including Finnish and American players. With this thesis, the writer wants to give his contribution to the field of cross-cultural management and cross-cultural understanding by researching about the cultural differences of Finnish and American culture by doing the research to a field he’s familiar with.