The impact of a reward system on employee motivation 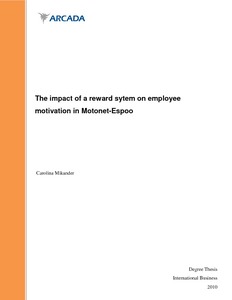 The purpose of the thesis was to investigate and analyze how well the current reward sys-tem of Motonet-Espoo helps generate employee work motivation. More specifically it aimed to find out which aspects of the reward system functions well, and which aspects could be further developed and improved in order to increase employee satisfaction. The theoretical part of the study introduces different theories of motivation and rewarding. Emphasis is put on Maslow's hierarchy of needs, the goal setting theory and the total re-ward system. The empirical part of the thesis was conducted by using a quantitative re-search method. The data was gathered with the help of a questionnaire and two inter-views. The aim of the research was to compare the different reward systems used in Mo-tonet-Espoo and find the pros and cons of them. The research results revealed how Moto-net-Espoo can develop their reward system by including the employees in the decision making process. The research supports the assumption that a well developed and func-tional reward system can increase employee motivation and satisfaction.