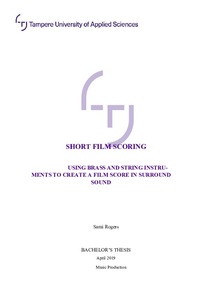 Rogers, Sami
All rights reserved. This publication is copyrighted. You may download, display and print it for Your own personal use. Commercial use is prohibited.
Näytä kaikki kuvailutiedot
Julkaisun pysyvä osoite on
http://urn.fi/URN:NBN:fi:amk-2019051610221

The sounds created by string and brass instruments have for centuries been the sonic source for strong emotional impact in storytelling. Starting from theatre, opera and symphonies it became a powerful way to enhance the emotional connection with what was perceived visually. Naturally it laid a strong foundation for film scoring and still to this day it is primarily what film makers rely on in order to gain a powerful effect on the audience.

This thesis explains the methods of using string and brass instruments in a film score and its effect on a contemporary short film. The characteristics of the instruments used are discussed and analyzed in order to understand their role in the story and the recording methods used. It is then explained how the recordings are processed for the films 5.1 surround sound environment.

Creating a score in 5.1 surround sound environment by recording strings and brass contains number of variabilities that are concluded in this thesis. From the creative process to the technical implementation, this process is explained in detail and supported by qualitative research that was gathered from various literature works and web sources made by experts in the field.