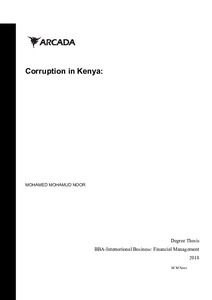 Noor, Mohamed Mohamud
All rights reserved. This publication is copyrighted. You may download, display and print it for Your own personal use. Commercial use is prohibited.
Näytä kaikki kuvailutiedot
Julkaisun pysyvä osoite on
https://urn.fi/URN:NBN:fi:amk-2019051610181

This thesis is one that focuses the lack of checks and balances in Kenya´s institutions that have failed to deliver the mandates that have been accorded to them thus leaving Kenyans economically frustrated and their rights snatched as a result of the corruption that has blanketed the nation.

Corruption is often associated with abuse of entrusted power and embezzlement of resources where a bribe is a major factor in exchange for preferential treatment and where there is corruption there is always bad governance. Like many other countries in the world, Kenya´s economy has been crippled by corruption hence making Kenyans live in abject poverty. The country is blessed with plenty of fertile agricultural land and has the world famous tourist destinations with ample of wild animals, least to mention the abundant natural resources. Despite this, the country’s economy is held back by a high level of corruption in all sectors of the economy.

Corruption is discussed with all its consequences, the nature of its occurrence and worst-case scenarios in Kenya. The other aim of the report is to bring forward the World Bank´s strategic tool for combating frauds, embezzlements and other means of corruption and see how it can be related to Kenyan´s way of fighting corruption.

A qualitative research method, a desk-top study, is used as the way of collecting data through reviewing available literature materials. Academic sources e.g. books, peer-viewed articles, and journals were the main sources with a supplement from non-academic sources e.g. newspapers and government published reports.

A brief description of Kenya is in the appendix of the report.