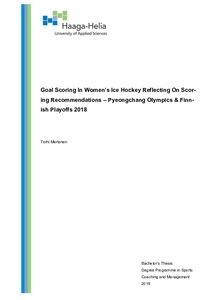 Mertanen, Terhi
All rights reserved. This publication is copyrighted. You may download, display and print it for Your own personal use. Commercial use is prohibited.
Näytä kaikki kuvailutiedot
Julkaisun pysyvä osoite on
http://urn.fi/URN:NBN:fi:amk-2019051710314

The purpose of this case study was to determine how do women in top level score goals re-flecting on scoring recommendations. The other purpose was to compare if there are differ-ences in goal scoring between women’s ice hockey in the international level (Olympics) and national level (Finnish Playoffs). Also men’s ice hockey and goals scored by Canada and USA were compared with the results.

The design, or strategy, of this study can be seen as a (comparative) case study. Previous research has been done on goal scoring as a whole, but not any specifically on scoring in women’s ice hockey. In the theoretical part the thesis takes a look on the women’s ice hockey in general, the Olympics and Women’s National League in Finland. The framework of the literature review and the chosen variables in the study comes mainly from the Finnish Ice Hockey Association recommendations in goal scoring. Other parts of the literature focus on instructive information on goal scoring and references from men’s ice hockey.

The study covers only the goal scoring against the goalie and does not tackle any reasons behind the goals (e.g. puck possession, number of scoring chances etc.). The biggest defect of this study is the number of analysed goals. Is the sample big enough to draw conclusions about scoring in women’s ice hockey in general?

The key conclusion was that many of the scoring recommendations in men's ice hockey being analysed in this study seem to support goal scoring also in women’s hockey. Also many of the results seem to be in line with the men’s results, even though there are some differences too. The small amount of goals made from the blueline in women’s ice hockey was striking as well as the big percentage of goals that included crossing the center line. When compared with men’s ice hockey the number of one-timers to score a goal is lower – On the other hand the number is clearly bigger in the Olympics than on the national level. The key outcome of this study was a list of scoring recommendations for coaching women’s ice hockey.