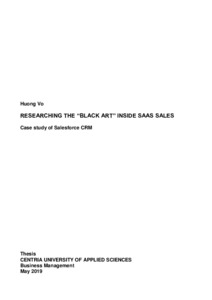 Vo, Huong Jr
All rights reserved. This publication is copyrighted. You may download, display and print it for Your own personal use. Commercial use is prohibited.
Näytä kaikki kuvailutiedot
Julkaisun pysyvä osoite on
http://urn.fi/URN:NBN:fi:amk-2019052111104

The aim of this thesis was to study on the area of Software-as-a-Service (SaaS), particularly sales process and tactics to gain insight success in SaaS market. The sales team and sales representative role were also focused in order to define what actions, applications to make hyper growth in revenue of software companies. The case study was about Salesforces – hugely successful American cloud-computing company – is also known as the pioneer in providing cloud-base service in SaaS market.

The qualitative research method was used in the research with hypothesis claim and backup documents. The study materials were acquired through e-library of Centria University of Ap-plied Sciences, formal articles and documents from Internet. In addition, most data were col-lected from established research works based on SaaS sales process and SaaS companies.

According to the theoretical study part, compelling examples and analysis, the thesis results show that SaaS is in high demand and selling software as a service are becoming more important. The selling and purchasing processes are also so much different from traditional ways, which requires innovation in approaching prospects, communicating with customers and ability to solve their pain points. All of these highlight the imperative role of sales depart-ment/ team/ sales person and sales tactics used.