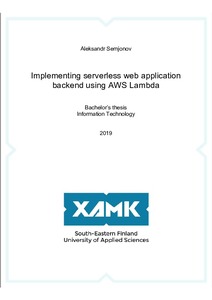 This work investigated the serverless application design using AWS Lambda provided by Amazon as a cloud platform of choice. Theoretical part described both the industry standard approach to servers and the upcoming serverless technology, briefly touching on the history of the former and providing an in-depth explanation and introduction of the latter. The advantages and disadvantages of serverless application design was discussed in detail, without a significant focus on AWS over other cloud platform providers.

In the practical part, a small-scale real-world application specification was introduced. The
application in question was a supplementary backend for a previously created website, providing a service of private messaging to existing users, while being invisible for the end-user. Step-by-step instructions are provided to implement a similar application using AWS Lambda and Node.js. Relevant code snippets and configuration files were included and explained in detail.

As a result, a working application was produced, tested and deployed to cloud environment. A list of encountered problems and possible solutions was provided, and monetary benefits of serverless were discussed. The goal of the work was accomplished.