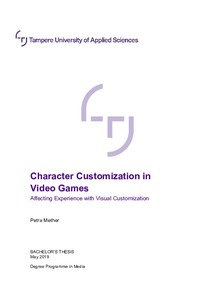 Mether, Petra
All rights reserved. This publication is copyrighted. You may download, display and print it for Your own personal use. Commercial use is prohibited.
Näytä kaikki kuvailutiedot
Julkaisun pysyvä osoite on
http://urn.fi/URN:NBN:fi:amk-2019052812527

The topic of this thesis is various kinds of character customization options present in video games, mainly in role-playing video games.

The purpose of this thesis was to learn what forms of customization are available for video game characters in games and how they have evolved and changed over time. Possible risks and opportunities of character customization were also researched from both a developer and player perspective. The collected information was used as a base for creating a simple paper prototype of a visual character customization mechanic.

In conclusion, it seemed that the testers saw potential in the tested mechanic, but the number of testers was so small that the results cannot be considered significant. The prototype would need more work and more rounds of testing to give solid, reliable results.