Cross-Cultural Leadership: A comparison between the Finnish and German working culture and its leadership practices 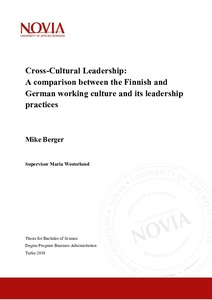 Berger, Mike
All rights reserved. This publication is copyrighted. You may download, display and print it for Your own personal use. Commercial use is prohibited.
Näytä kaikki kuvailutiedot
Julkaisun pysyvä osoite on
http://urn.fi/URN:NBN:fi:amk-2019052812777

Finland and Germany have a close business relation to each other. For that reason, it is important to understand both of the cultures and to be able to work with both of them, which includes leading employees from both cultures. Within this thesis, the German and Finnish working culture, as well as their preferred leadership styles, were investigated.
This happened with the help of common theories on culture and cross-cultural leadership, which were compared in the first part of the paper. The findings from this part were then used for the empirical part, in which leaders from both of the business cultures took part in interviews. The aim of the thesis was to investigate the differences and similarities between the two cultures and to give guidance on how a leader should behave in order to be successful in both cultures.
The main findings of this paper are that Germany and Finland have working cultures that have, despite of some differences, a lot of similarities. While the Finnish culture is way more informal, the German culture is more assertive. Humane-orientation plays an important role in Finland, while it has a minor one in Germany. Additionally, there is an open-door policy of Finnish leaders, which is still not common in the German culture. In the end of the thesis, those differences were used to give an idea about how the cultures and its leaders could adapt to each other.