Simulation of an anaerobic sludge stabilization in wastewater treatment plant 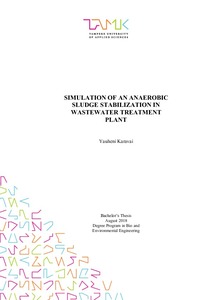 Karavai, Yauheni
All rights reserved. This publication is copyrighted. You may download, display and print it for Your own personal use. Commercial use is prohibited.
Näytä kaikki kuvailutiedot
Julkaisun pysyvä osoite on
http://urn.fi/URN:NBN:fi:amk-2019052913000

Nowadays cleaning water becoming more and more popular around the world and with this issue Waste Water Treatment Plants are dealing with. In order to get water clean, there are a lot of steps it needs to go through. The aim of this work was to simulate an existing sewage treatment plant, which is called “Schladen”, located in Lower Saxony, Germany with a simulation program Simba# with the data provided by the company. Next step, to model a new sludge stabilization system inside the plant and show the outcome of different possible installations with the same program. 3 simulations were done in order to show that. 1st was the current situation of the plant, 2nd was the new system with primary clarification tank and digesters connected in series and parallelly and the last one was with fine screen instead of primary clarification tank.

The simulations were done, and the results were obtained for all of them. The meas-ured values in the outflow from the plant did not exceed the limits almost for the whole time-period, which was analyzed, and cannot be compared to the real life, due to lack of data provided. Simulation 2 with primary clarification tank was satisfying and showed positive outcome, which cannot be said for the Simulation 3 with fine screen, which was modeled to the program, where the outflow showed high concentrations of total nitrogen, which was up to 4 times higher than the limit as we as the other ana-lyzed parameters.