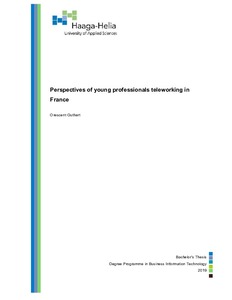 This thesis investigates the phenomenon of telework as experienced by young professionals who telework in France in 2018-2019, at the time of the thesis: what form the practice is taking, what the teleworkers think of telework, what they identify as its strengths and weaknesses, and what its future prospects are like in their eyes.

The report first reviews the previous research in the area, defining telework and assessing
the status of its growth and penetration in global and French work practices, drawing a profile of French teleworkers, then listing the necessary technologies needed for telework and the known advantages and issues of telework and its future prospects as already documented.

Afterwards, thanks to qualitative interviews with French teleworkers, the report will offer innovative insights on telework in French organizations, while the rest of the results show
consistency with the previous research:
- Telework is still mostly understood as home-based, although it seems sufficiently
known that teleworkers are rarely surprised when they start teleworking for the first
time;
- Organizations prefer offering telework by a tacit agreement rather than contractually;
- Teleworkers appreciate getting a break from the socialization of the office, the benefits for the environment of telework and the managerial changes it leads to as managers need to evaluate the employee performance instead of their simple presence;
- Indeed, there still seems to be a cultural bias against telework in France at management level, although it is becoming the fact of a minority;
- The technological requirements to telework may seem daunting to some;
- Telework currently cannot replace efficiently the social relations of the office for interdependent work;
- Telework is becoming more and more important to the French workers despite becoming a common occurrence in France only recently, and organizations will need to adapt in the future to attract and retain those professionals;
- Continued growth is widely expected for the near future, and many hope telework
will be an answer to many societal challenges, such as climate change and the desertification of the countryside.

The thesis eventually opens to possible subsequent research, validating its findings in a quantitative and representative way, and questioning employers on their own views on these findings.