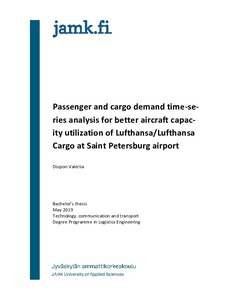 Diupon, Valeriia
All rights reserved. This publication is copyrighted. You may download, display and print it for Your own personal use. Commercial use is prohibited.
Näytä kaikki kuvailutiedot
Julkaisun pysyvä osoite on
http://urn.fi/URN:NBN:fi:amk-2019052812409

Lufthansa Cargo (LCAG) was a subsidiary company of Lufthansa (LH) which carried out the cargo business for it. LCAG had a lot of stations around the world which manage cargo handling. One of those stations was situated in Saint Petersburg (LED). For the moment of study, LCAG at LED had only 7.29% of cargo transported imported and exported to and from Cargo Terminal Pulkovo (CTP) while LCAG’s competitor airlines and the leader in all freight transported through the same cargo terminal owned the share of 37.44%. The major reason for this was accounted to be that competitors’ fleet had a greater capacity, so more load with the greater dimensions could be carried. Those competitor airlines were using wide-body aircrafts (WB a/c) for the LED station while LH had only narrow-body aircrafts (NB a/c) employed in its turnarounds. This had given LH restrictions to carry bigger loads due to smaller capacity. Therefore, time-series analysis of the LH and LCAG passenger and cargo historical data was made to forecast future passenger and cargo demands. According to the predicted demands, the a/c fleet assignment was done in order to see whether there was any need for change which would result in better capacity planning and, subsequently, in larger amount of revenues. The proposed option states that a/c change, from NB to WB, was only applicable during operation under summer schedule (June-August) and on the route FRA-LED-FRA in the morning. The respective outcomes showed a number of pros and cons regarding the final decision. However, the precautions and suggestions for the future studies were revealed and brought out.