Improvements of the warehouse packaging area 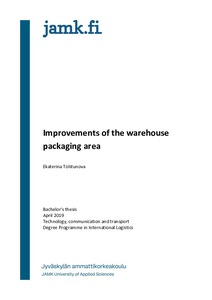 Tolstunova, Ekaterina
All rights reserved. This publication is copyrighted. You may download, display and print it for Your own personal use. Commercial use is prohibited.
Näytä kaikki kuvailutiedot
Julkaisun pysyvä osoite on
http://urn.fi/URN:NBN:fi:amk-2019052812392

The packaging is one of the most significant elements in the efficient performance of the organization, which should comply with all the company's stated requirements. Poor packaging leads to failures and ultimately to losses of the company. Therefore, the principal goal of the research work was to enhance the packaging zone effectiveness with the purpose of improving the position of the Logistikas Oy firm.

During the research work, which included observations, surveys, and inspections, it was found out that the packaging area was weakly organized because of the poor guidance. Lack of the materials in the stock with unreliable data in the software was in the list of potential causes of the main problem.

The key steps for achieving the goal of the thesis were analyzing the current situation of the packaging site in the warehouse facility, identifying the problems caused by bottlenecks and determining cost-effective solutions for the recognized bottlenecks.

Possible solutions for improving the packaging area were offered to Logistikas Oy. The current layout of the warehouse hall where the packaging happens was measured and created. Packaging instructions in an electronic form were made and suggestions concerning the training of the employees, minimization of the extra movements of the workers and new inventory procurement were suggested. As a result, increased labor, machine productivity and a minimized number of mistakes should be achieved.

The completed study and proposed improvements are considered the initial phase of solving the problem of optimization. Gained results will help to overcome failures while operating, and hence, increase efficiency in Logistikas Oy.