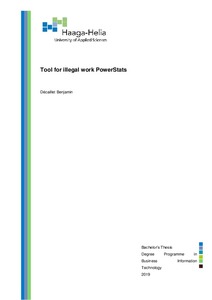 
Décaillet, Benjamin
Benjamin, Decaillet
All rights reserved. This publication is copyrighted. You may download, display and print it for Your own personal use. Commercial use is prohibited.
Näytä kaikki kuvailutiedot
Julkaisun pysyvä osoite on
https://urn.fi/URN:NBN:fi:amk-2019052913304

As companies began collecting and storing data wherever they could, the volume of data became huge and posed a challenge in interpreting and analysing it. With technology, applications and protocols becoming more and more powerful in terms of computing ability, and efficiency the tools to process the collected data have therefore been available to companies. The ability to transform the stored data into useful information was then attainable by companies and from this point on companies began implementing Business Intelligence which is the use of these technologies, applications and practices to transform the data into information.
In this line of thought this thesis is commissioned by the "Bureau des Métiers", a Swiss company. One of its role is to control that the collective agreements are respected so that they wanted a tool that would make it easier to explore, present and analyse the collected data about illegal work. As this is a typical use of Business Intelligence, the aim of this thesis is to produce a useful Business Intelligence tool designed specifically for their needs.
The following thesis will then first present both the theory of the concept and history of Business Intelligence. Next four different technologies have been selected based on the knowledge of the author’s and on the market offers where the company is situated. Then the
implementations of the tool above mentioned and the process of its development will be discussed. This development will be split into two parts to match the requirements of keeping the way of extracting data that the company already has. The first part is the process and treatment of the extracted data that takes place in an excel file with macro and the second part is a power BI file in which all the reports and diagrams are located and where the company will be able to explore the data in a meaningful way.
The result of this thesis is a tool that will be delivered to the Bureau des Métiers consisting of an excel file containing the necessary macros which is linked to the power BI file where the reports are. In the conclusion the thesis will mention that the Bureau des Métiers is satisfied with the tool and further evolution will be discussed in order to free the tool from the treatment in an Excel file and thus directly access the database from the Power BI file.