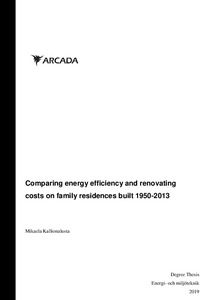 Kallionalusta, Mikaela
All rights reserved. This publication is copyrighted. You may download, display and print it for Your own personal use. Commercial use is prohibited.
Näytä kaikki kuvailutiedot
Julkaisun pysyvä osoite on
https://urn.fi/URN:NBN:fi:amk-2019060314309

Through my research I set out to discover whether or not renovating an older home to
modern energy efficiency standards is possible and / or a financially viable option versus
buying a new home. I analyzed data from three different houses to compare costs and benefits for each case. For the older houses I chose one in Lahti that was built in 1954 and another in Pornainen, built in 1980. For the baseline standard of current building codes, a house in Porvoo that was constructed in 2013 was used.
The undesirability in the housing market of older homes, inspired me to learn what, if anything, could be done to improve their usefulness and value thus reducing the number of unwanted buildings. Simulations showed that one of the most effective means of achieving this goal were making homes more energy efficient. Adding insulation, updating the existing heating system, renewing windows, doors, and roof, as well as, adding mechanical ventilation all had a positive impact. Furthermore, renovating and updating major items could increase the house’s useable lifespan by decades, provided the structure is sound.
The floorplans and houses were created using IDA ICE. Two simulations, one before and one after, were made on each of the older houses. Another was created from the house built in 2013 to use as a comparison. The first simulations used U-values that were valid at the time of construction and the second simulation with U-values that conform to current standards. In the second simulation, mechanical ventilation with a heat exchanger was added along with the heating system upgraded to geothermal. Further research involved information on the housing situation in Finland, including statistical costs analysis of available lots as well as prices of homes sold in the selected locations. Renovation costs were calculated and compared to the costs of building a new home.
These comparisons resulted in concluding that renovating a house in Finland is more cost effective than new construction. Savings of over 46% were possible by renovating instead of building, but a more conservative number of 18% was used to safely cover any unforeseen costs due to unexpected repair needs . The IDA ICE simulations showed that energy efficiency was increased significantly by lowering the energy consumption due to heating by more than 45 %. The results also indicated a reduction in overall energy consumption, bringing both older houses’ energy certificate class value up to the C level.
The findings of this research will allow home buyers, sellers, and current owners realize that up-cycling an older house by renovating is a cost effective and viable option to buying or building a new construction.