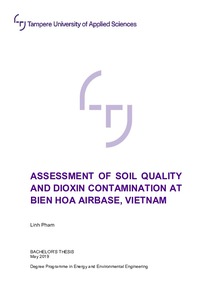 Pham, Phuong Linh
All rights reserved. This publication is copyrighted. You may download, display and print it for Your own personal use. Commercial use is prohibited.
Näytä kaikki kuvailutiedot
Julkaisun pysyvä osoite on
https://urn.fi/URN:NBN:fi:amk-2019060214070

The purpose of this study was to assess the soil quality and the differences in physical-chemical properties of dioxin contaminated soils and non-contaminated soils at Bien Hoa Airbase. Another purpose was to assess different remediation technologies on environmental compatibility basis and suggest environmentally friendly technologies adapting to the soil conditions at Bien Hoa Airbase.

The dioxin concentration in soil were measured and the soil quality was assessed by conducting the following analysis: particle-size distribution, wet aggregate stability, pH, redox potential, electrical conductivity and total organic carbon. All experiments were carried out in the laboratory. The assessment of remediation technology was based on the Environmental Assessment report of Bien Hoa Airbase and other literatures.

The results showed that dioxin concentration in the majority of samples taken from Pacer Ivy area exceeded allowed limits. Dioxin contaminated soil had higher clay content than normal soil. Soil structure at all locations was very poor, characterized by low organic matter content and low wet aggregate stability. Regarding to remediation technologies, thermal treatment which was selected for some remediation project in Vietnam might cause harms to the environment. Further findings indicated that combination of phytoremediation using vetiver grass and bioremediation using anaerobic microorganisms was a more environmentally friendly alternative for dioxin contamination at Bien Hoa Airbase.

More research on this combined remediation method should be done to determine the effectiveness and the practicability of the treatment. In addition, future study on the soil quality at Bien Hoa Airbase can be improved with some modifications in the methodology.