Studying regional differences in consumer attitudes towards meat consumption in Finland: is the direction sustainable? 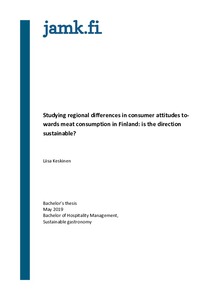 Keskinen, Liisa
All rights reserved. This publication is copyrighted. You may download, display and print it for Your own personal use. Commercial use is prohibited.
Näytä kaikki kuvailutiedot
Julkaisun pysyvä osoite on
http://urn.fi/URN:NBN:fi:amk-2019060514929

In the theoretical framework a sustainable food system, how meat production affects the environment and climate, how much meat is produced and consumed in Finland and how the role of meat has changed in the Finnish food culture throughout the history of Finland are explained generally.

The research methods of the thesis were quantitative. The data analyzed was broad (N = 1000) and consisted of Finnish people aged from 15 to 74-years-olds. The analysis of the data was made by K-means clustering. Differences were searched between the regions, statistical groupings of municipalities, age groups and different educational backgrounds.

The result of the research showed that there were little to no differences between differ-ent regions or statistical groupings of municipalities in Finland on consumer attitudes to-wards meat consumption. However, there were clear divisions in meat consumption habits and attitudes between the clusters, and the most surprising finding was that the people who ate meat the most were also those who were the most willing to decrease their meat intake in the future. Further research about the topic would be needed to confirm these findings.