The Role of Sponsorship in the World Elite Sports. Case: Gazprom — RusVelo 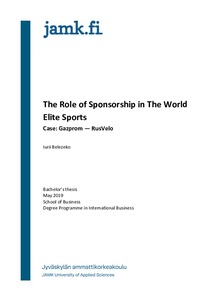 Belezeko, Iurii
All rights reserved. This publication is copyrighted. You may download, display and print it for Your own personal use. Commercial use is prohibited.
Näytä kaikki kuvailutiedot
Julkaisun pysyvä osoite on
http://urn.fi/URN:NBN:fi:amk-2019060615212

The research focused on conducting analysis of the role and objectives of sport sponsorship in the professional cycling. The Russian team Gazprom — RusVelo was chosen as the relevant and uncommon case to undertake the research in the field of sport sponsorship. Remarkably, the team’s title sponsor was not operating in retail, but in the business-to-business field and increase of sales was not among their objectives in the existing sponsorship project. The goal of the research was to identify the objectives of Gazprom in sponsoring a cycling team and identify how both parties evolve throughout their partnership.

The qualitative case-study was chosen as the research approach was to enhance understanding and obtain detailed information about the role of sponsorship in the specific example. The primary data was obtained by using semi-structured interviews with the main stakeholders of the case organization.

The empirical findings revealed that the case organization had two major objectives: the promotional and national ones. The team extensively participated in the international competitions, what met the sponsor’s marketing and image objectives in Europe, the strategically essential market of Gazprom’s business operations. Moreover, the team played a crucial role in Gazprom’s corporate social responsibility. It was achieved through the general development of the cycling sport in the country. The uniqueness of the case sponsorship project was in its mono-nationality, all the athletes of the team were Russian. That justified the implementation of the corporate social responsibility strategy of the company, which was majority-owned by the Russian Government. However, it was necessary to consider that such valuable goals bring not only benefits and return on investment, but also challenges, additional responsibilities and risks that were evaluated in the research.