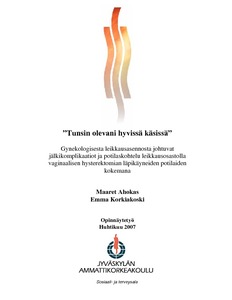 The aim of this research was to inform about latter complications relating to gynaecological operation
position and produce instructions for setting the gynaecological operation position. The objective
of this research was to bring the injuries caused by the operation position into awareness and
so advance the preparedness of the personnel in a certain hospital’s operating unit. The research
also aims to pass on information from the patients to the nursing personnel about patient treatment
during the operating care. The research utilized a qualitative research methodology. The research was attended by 16 vaginal hysterectomy patients during 30.10.2006-9.2.2007. The chosen research method was a doublebarrelled
questionnaire. The first part of the questionnaire was consisted of human figures in which
the attendees marked the latter complications caused by the gynaecological operation position. The
results were analyzed by using the deductive content analysis based on the already known facts.
The second part of the questionnaire included three unstructured questions which dealt with patient
contentment in operating unit. The material from the unstructured questions was analyzed by inductive
content analysis based on the themes of the material. In the results attendees described symptoms which were associated to the gynaecological operation position. Neural injuries and over extension of the limbs, pressure sores as well as other injuries caused by the position were formed to the three main categories. From the material which dealt
with patient contentment was occurred that the treatment in the operating unit had been respectable
and friendly according to the attendees. The operating environment and protection of privacy were
reported especially well organized. The research proved that to patients’ natural trajectories, sufficient and accurate use of pads and prevention of pressure injuries should be more noticed in setting gynaecological operation position.