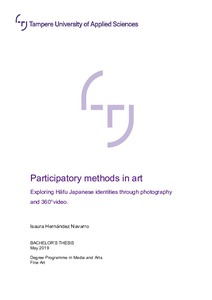 Hernández Navarro, Isaura
All rights reserved. This publication is copyrighted. You may download, display and print it for Your own personal use. Commercial use is prohibited.
Näytä kaikki kuvailutiedot
Julkaisun pysyvä osoite on
http://urn.fi/URN:NBN:fi:amk-2019060615352

I come from Latin America and my personal background is a mix of ethnicities, countries and cultures. Born in Costa Rica but a local in Finland. This duality of my own, encourage the creation of several projects on identity and self-identity.

Starting in 2016 with Uproot, photo series of mixed nationality couples living in Finland. The series dealt with being different in a relationship but choosing to overcome mental, physical and bureaucratic barriers together. Consequently, the idea for the photo series Selfhood emerged.

Utilizing the method of participatory photography, in Selfhood, the objective was to create a long-term photo project with the participants, who are half Japanese and experience our view of self-identity from the multicultural and multi-ethnic perspective.

Beside the photo series, the 360ۤ° video technique was used for the gallery exhibition planned for the project, in the second work: Lonesome. It includes the audience into an immersive experience of the participant’s stories and the landscapes of their homeland Japan in a 360° space.

I conclude that participatory art proves to be a competitive method for multicultural and multi-ethnic identity research. This method allowed me to gain trust with the participants and more importantly to create a symbiotic relationship between the photographer, the camera and the subject.