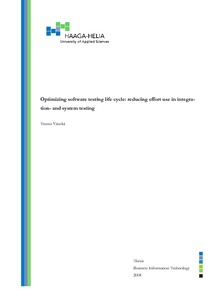 For a software company, it is very important to have a functional process that guarantees smooth work flow, and that is comprehensive for all roles of the company. But not all processes are suitable for real life; they only sound good in theory. I decided to make a research on different processes to see if it was possible to create a custom process to a company that is in a need for one.

To narrow the subject to be more specific, it was necessary to specify the target areas of the research, system testing and integration testing. For the research it was also important to consider the possible company roles this investigation would probably affect the most. Those roles were a software tester, a software developer, and a software specification writer.

Before the actual “brain storming” for the new solution could even take place, it was clear that some of the well known and already made software development processes would have to be
reviewed and studied in order to have a better picture of the composition of a development process. Just studying processes and models wouldn’t have been enough; also the question “What kind of tests are there, and how are they done?” should be answered. That’s why I had to review different testing methods for this project also.

After studying processes and models, testing methods, it was time to see how all the theories differed from reality, and what parts were the most likely reasons for those differences. Only after those analyzes it was possible to pursue the ultimate goal of this research.

But the result wasn’t what I at first expected. It wasn’t a magnificent scientific breakthrough, but vice versa; it was a moment of clarification. Only a theory of an improvement was
achieved during this research, a collaboration of different process models mixed as a hybrid version, but the lesson itself was far greater than I would’ve ever imagined. It also made me see that I clearly wasn’t the only one thinking about these things.

There was no time for real life experiments. Continuing this project in the future would be interesting indeed, to see if my theory would actually work in practice. But that would require a lot more time, and I definitely would like to hear a second opinion of the theory.