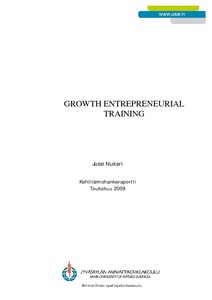 This Growth Entrepreneurial Training (GET) development project has been executed in the School of Business and Services Management (SBSM) of JAMK University of Applied Sciences. GET project concerns only one semester, from August 2008 to June 2009. The roots of GET project goes back to University of California, San Diego and its Connect organization. Connect was created after a layout of high paying jobs in San Diego region over 20 years ago. All together 82.000 defense engineering and manufacturing jobs were lost, almost over one night. San Diego had been too dependent on too few industry sectors. The decision makers decided to organize a program to educate the San Diego community on entrepreneurship and how to commercialize local research-based discoveries. They decided to start growing diverse population of employers. SBSM has arranged growth entrepreneurial training programs developed according to the original Connect model. Ms. Sharon Ballard served UCSD Connect as a first industrial management fellow starting in 1996. She developed later Supercoach® Entrepreneurial Training programs, which have been used in Jyväskylä from January 2003. Enable Ventures Inc., the company of Ms. Ballard, has trademarked these training practices. During this GET project new ways of using these practices were developed, new proposals were applied and all together four Supercoach® Trainings were arranged in Jyväskylä, Oulu and Tampere. The pedagogical approach used in Supercoach® Entrepreneurial Training programs is based on both experiental and cognitive learning strategies. Modern eLearning and eMeeting environments are in use in SBSM’s degree programs and the use of co-operative and collaborative learning is increasing. The economic situation has changed radically during the GET project. In Jyväskylä alone, 700 welleducated employees from large technology corporations, like Nokia and Metso, were laid off. Earlier only manufacturing jobs were lost from Finland to countries offering less-expensive labor force. Now new questions have emerged, like what kind of elements is needed in the Information Economy Recovery and Stimulus (IERS) programme. The need for the activities that GET project propose, is now even more important than it was foreseen when initiating the GET project.