Playing the Publicity Game : Music Promotion to the Finnish Media 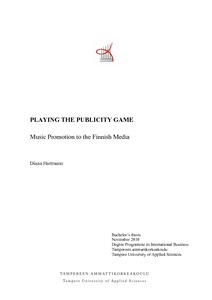 Music promotion is all about getting the word out about an artist and respectively getting a good song heard. In its essence it is no different from promotion in general, but the specialty lies in that music is connected to emotions, thus it is heavily dependent on individual tastes. With declining promotion budgets, especially at smaller independent record labels, artists depend more and more on publicity as a form of ‘free’ promotion. The current oversupply of music has resulted in fierce competition for media attention and consequently publicity can often be very hard to obtain.

This thesis aimed to take a closer look at the media’s role in music promotion with the focus on the concept of publicity, determine the stimuli for media’s interest in an artist and define directions for a mutually beneficial cooperation between music companies and key media.

The study focused on the Finnish market and firstly analyzed the two main industries concerned, music and media. It built on the theoretical concept of the marketing mix, which needs to be applied to the mass media in order to obtain the publicity that forms a vital part of the promotion mix that is targeted at the general public. The empirical research incorporated both qualitative and quantitative elements in the form of interviews with key industry professionals and a media survey.

The findings of the research showed that the views of industry professionals matched by and large and it was agreed that there is room for improvement. The factors of biggest impact could be defined as the quality of the music, the quality of the promotional material, accurate targeting, professionalism, understanding of the other side’s needs, wants and resources and most importantly building and utilizing a strong professional network. Suggested further research could concern the correlation of media visibility and album sales.