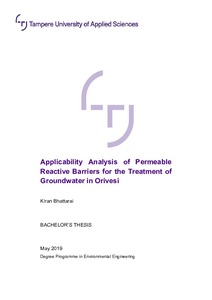 Bhattarai, Kiran
All rights reserved. This publication is copyrighted. You may download, display and print it for Your own personal use. Commercial use is prohibited.
Näytä kaikki kuvailutiedot
Julkaisun pysyvä osoite on
https://urn.fi/URN:NBN:fi:amk-2019061717095

This study was aimed to examine the overall application possibility of constructing and operating Permeable Reactive Barrier (PRB) for remediation of chlorinated solvents in groundwater. RESET project, initiated by Finnish En-vironmental Institute (SYKE), was the reference study for PRB construction, applications and monitoring data interpretation for remediation of chlorinated solvents in Orivesi aquifer contaminated with trichloroethene (TCE) and tetrachloroethene (PCE). Finnish by-product metal Iron, known as Zero valent Iron (ZVI), was studied for the treatment of TCE and PCE in the PRB constructed in Orivesi site.

The materials for site information and PRB construction was provided by SYKE. The various tests including slug test, packer test, tracer test and column test were researched and included in the study which define the groundwater flow, hydraulic conductivity, contaminant distribution and other variable factors affecting the construction and applications of PRB. Graphical interpretation of TCE, PCE, Vinyl Chloride (VC) and cis 1,2-dichloroethene (DCE) was done to interpret the long term remediation of groundwater with PRB.

Finnish geological and climatic conditions posed some limitations for the construction and applications of PRB. Bed rock fracture zones, glaciofluvial deposits and change in groundwater temperature created difficulties in estimation of barrier configurations and positions. The remediation of TCE and PCE was seen decreasing with increase in VC concentration in treated groundwater.

The TCE and PCE remediation was successful to some extent where the concentrations in treated groundwater dropped below limit values. The dis-cussion included possible solutions for the improvement of barrier performance in long term use with multiple barrier system including sand filter wall. Comparative study of chemical injection process with PRB showed possibility of PRB use might be more efficient in long term use with advance research and hybrid technology developments.