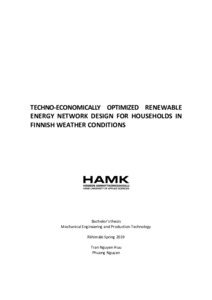 
Phuong, Nguyen
Tran, Nguyen Huu
All rights reserved. This publication is copyrighted. You may download, display and print it for Your own personal use. Commercial use is prohibited.
Näytä kaikki kuvailutiedot
Julkaisun pysyvä osoite on
http://urn.fi/URN:NBN:fi:amk-2019061717123

The background to this thesis is related to Finnish households’ energy consumption. It is recorded by Statistics Finland that in 2015, the electricity used in housing amounted to 61 terawatt hours (TWh). Most of the electricity is used for space heating and heating of domestic water, the rest is used for cooking, lighting or other electric devices. According to the difference in usage percentage and Finnish weather conditions, it is easy to find out that the use of electricity does not stay constant throughout the year. Electricity consumption raises during winter and is reduced eventually when the weather gets warmer. Therefore, it is essential to examine and take into use ren. energy systems as well as taking renewable energy systems into use to ease the urge of saving electricity in peak seasons and to reduce the high amount of carbon dioxide emissions by producing electricity from fossil fuels sources.

The goal of this project was to evaluate the possibility of designing a reliable technoeconomical electrical grid by using wind turbines and Solar photovoltaic power. The study aimed to examine whether it was viable to use renewable energy sources to produce enough electricity that can feed on intermediate – large scale a household neighborhood in Finnish cold climates. The project work was divided into sperate parts: technology, technology working environment and economic issues. Basic operation principles of wind and Solar photovoltaic power, energy storing, and energy converting were focused in the technology part. The current situation, challenges and potential of these renewable energy sources in the Finnish energy market are focused on this thesis. Also, climates, wind flows, Solar irradiance in the entire country were also studied in order to evaluate the feasibility of the project. There was also an economic analysis made to comprehend the profitability of using an electricity grid that produces electricity from renewable energy sources.

The thesis was initiated by studying literature from various sources. Variable sources were studied, such as annual reports from energy authorities, scientific articles for renewable energy resources uses, and conference proceedings that were related to the research objectives. In this project, mathematics and physics related knowledge was used in making calculations, critical thinking and information analysis were applied when designing the energy network, engineering design and some other statistics related knowledge was also examined.