CUSTOMER EXPERIENCE IN A MASS-CATERING SERVICE 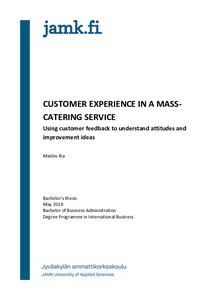 Maslov, Ilia
All rights reserved. This publication is copyrighted. You may download, display and print it for Your own personal use. Commercial use is prohibited.
Näytä kaikki kuvailutiedot
Julkaisun pysyvä osoite on
http://urn.fi/URN:NBN:fi:amk-2019062617543

Literature suggests that it is of value for organizations to receive customer feedback to stay competitive in the marketplace. Feedback may be used to improve existing and to de-velop new products. Customer experience is considered as one of the main focal areas of the innovation process. This paper studied the customer experience of the mass-catering service inductively by exploring the attitudes of the customers towards the service, as well as by analyzing customers’ improvement ideas regarding the service.
The research approach in this study was qualitative. Some of the qualitative data has been quantified. The primary data of roughly 200 interviews were collected with semi-struc-tured interviews, collected by approximately 50 interviewers. The generic research ques-tions were operationalized by six interview questions. The data collection was conducted in the first part of 2018.
The respondents were found to have complex and sometimes contradicting views regard-ing the service. Gender and occupation were found to have an impact on the responses. Four general categories were identified according to which attitudes and improvement ideas could be captured and analyzed: food, service, place and price. These categories were found to have relationships with each other. Among customers, some categories were found to be more popular than others. It was also found that customers frequently have stated an attitude and given an improvement idea regarding the same aspect of the service. Future research could explore how innovation ideas captured in the form of cus-tomer experience feedback could be prioritized and implemented. Relationships between the established general categories may be explored further. An in-depth data analysis and more specific conclusions can be found in the confidential part of the thesis.