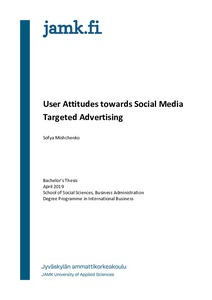 Mishchenko, Sofya
All rights reserved. This publication is copyrighted. You may download, display and print it for Your own personal use. Commercial use is prohibited.
Näytä kaikki kuvailutiedot
Julkaisun pysyvä osoite on
http://urn.fi/URN:NBN:fi:amk-2019063017602

Nowadays technology is growing rapidly, and businesses learn to take advantage of this challenge. Consequently, marketing experts are utilizing tracking technology called targeted advertising and use it for marketing on social media. However, with the significant rise in the popularity of targeted advertising, it is crucial to study social media users’ reactions to it and learn how to utilize it to its full potential.
The objective was to understand social media user’s attitudes towards targeted advertising, as well as how it affects purchase intent and to establish what are the most favorable features and the most influential appearances of targeted advertisements on social media. In order to assist in conducting the research, the research objective along with two research questions were formed.
The qualitative research method along with its descriptive and explanatory nature required conducting semi-structured personal interviews with 16 participants in order to acquire in-depth responses. Social media users aged 20-25 were chosen as respondents and the interviews were conducted via Skype. Literature review was done with the help from academic sources such as articles, books and publications. After data collection the data was analyzed.
The results demonstrated the mixed feelings of consumers towards advertising. It was found both obtrusive and helpful. However, the attitudes towards targeted advertising on social media were mostly favorable. It was established that the most effective way of implementing targeted advertising on social media is to integrate it into the platform and to improve its targeting mechanisms for reaching the most relevant groups of people.