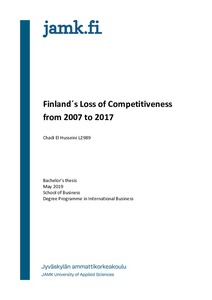 El Husseini, Chadi
All rights reserved. This publication is copyrighted. You may download, display and print it for Your own personal use. Commercial use is prohibited.
Näytä kaikki kuvailutiedot
Julkaisun pysyvä osoite on
https://urn.fi/URN:NBN:fi:amk-2019070317621

After the breakthrough of the Finnish telecommunication cluster -Nokia being its key
driver- and the well-known paper industry, Finland has had outstanding economic performances since the last decade of the past millennia. However, at the turn of the 21st century, Finland´s global competitiveness forefront position wavered, and a weakening begun specifically after the onset of the Global Financial crisis of 2007. This welfare nation has not regained its glory days ever since.

The objective of the present study was to gain insights into the factors and determinants behind Finland´s loss of competitiveness between 2007 and 2017 and to highlight their impact on the Finnish economy.

A qualitative research approach was chosen, and the primary data was collected through semi-structured interviews with three prominent Finnish professionals. Additionally, secondary data was acquired from trustworthy sources such as the Bank of Finland, Etla, Statistics Finland and the EU Commission reports. The World Economic Forum´s Global Competitive Index (GCI) was selected as the theoretical framework which rigorously guided the overall process of the present study.

The findings revealed that the downturn of Finland´s competitiveness was related to three pillars of the GCI: macroeconomic environment (III); goods market efficiency (VI); and business sophistication (XI). Insufficient funding, restrictive labor regulations, limited ability to innovate, high cost-competitiveness, ageing population and the downsize of the mobile and paper clusters were among the causes of Finland´s abated level of competitiveness.

Practical implications for future development were suggested including efficient allocation of funds, reforms to the welfare system and labor regulations. Recommendations for further research activities involved an exploration of a similar study comparing Finland´s competitiveness performance to its peers and an investigation of Finland´s financial market development that showed an impressive growth during the studied period. The limitation of the present study was its generalizability because national competitiveness includes a range of factors and determinants which affect countries differently.