Comparative Study on Competitiveness between Norway and Russia 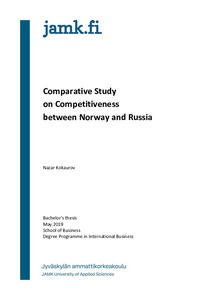 Kokaurov, Nazar
All rights reserved. This publication is copyrighted. You may download, display and print it for Your own personal use. Commercial use is prohibited.
Näytä kaikki kuvailutiedot
Julkaisun pysyvä osoite on
https://urn.fi/URN:NBN:fi:amk-2019070817645

In the modern world, scholars have paid significant attention to the competitiveness of nations, since it reflects the economic and the social situation of a country. There are frameworks and models that determine a level of competitiveness; therefore, it is possible to compare the competitive level of different countries. In particular, Norway and Russia have analogously developed oil and gas production, however, this inheritance of natural resources does not make the countries competitively equal. Actually, the Global Competitiveness Index 2018 (GCI) ranked Norway at 16th, while Russia was in the 43rd position. Thus, the objective of the present study was to investigate the reasons for Norway’s competitiveness over Russia. The GCI, which was used as the theoretical framework, allowed to conduct a cross-country comparison by illustrating distinctions in the provided so-called productivity pillars that were constituted by corresponding subpillars.
A comparative case study formed the research strategy, and the data was collected by applying a qualitative approach which allowed analysing the data in-depth. It was mainly reached through the secondary data retrieved from online sources. Also, it was complemented by primary data that was obtained from online semi-structured interviews with two native Russian-speaking respondents involved in researches at Nord University.
Preliminary results showed that there were five pillars (namely Institutions, Skills, Labour market, Financial system, and Innovation capability) that illustrated the highest contrast between the examined countries, while 23 subpillars were identified as the most problematic areas for Russia compared to Norway. In the in-depth analysis, the main findings were related to systematic drawbacks of Russia, its comparatively weak level of financing of education and businesses which also were not encouraged and supported enough to innovate. Additionally, the poorer economic circumstances of residents had a negative impact on Russia. Among the major reasons, it was found that cultural differences between the chosen nations influenced Norway’s competitiveness more positively. Practically, some of the successful actions of Norway were provided for Russian policymakers’ consideration in order to increase the competitiveness of the country.