Ideals, working conditions and the future for Swedish-speaking journalists in Finland 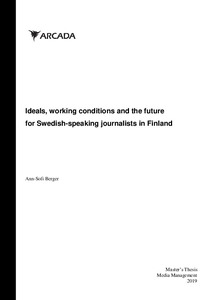 Berger, Ann-Sofi
All rights reserved. This publication is copyrighted. You may download, display and print it for Your own personal use. Commercial use is prohibited.
Näytä kaikki kuvailutiedot
Julkaisun pysyvä osoite on
https://urn.fi/URN:NBN:fi:amk-2019070317624

This thesis has studied the ideals, working conditions and future expectations among the Swedish-speaking journalists in Finland. The three research questions were: “What ideals do Swedish-speaking journalists in Finland consider in their work routines?”, “How do Swedish-speaking journalists in Finland experience job satisfaction and job performance?” and “What do Swedish-speaking journalists in Finland want for the future of journalism?” The method used was an online survey with multiple-choice and open-ended question sent to all journalists belonging to the group. 211 answers were received and analyzed. There was a large amount of informative answers to the two open-ended questions, which gave support and insight into the questions at hand and complemented the multiple-choice answers. The literature review defined journalism, its central movements and ideals and the role of journalists and this gave the study a theoretical context. Journalism is difficult to frame due to its lack of clear boundaries and as a profession it is defined by its ideology, which is constantly evolving. The respondents were generally aware of and emphasized the importance of the core ideals, such as being trustworthy, fact-based, neutral, independent, critical, a watchdog of democracy and to explain complicated things. They mostly depended on the Guidelines for Journalists in Finland and on their own judgement. The majority reported being satisfied with their jobs, but they also gave a lot of criticism and suggestions for improvements. Mainly they complained about a lack of focus on journalistic quality and they called for better leadership. For the future the journalists hoped for more colleagues and resources for investigative journalism. At present, many complained about stress and a lack of organizational plan and guidance, which is likely to contribute to the fact that a significant part of the participants had succumbed to pressure from superiors and/or from outside the editorial office – pressure that forced them to abandon their sense of journalistic ideals – and, as a consequence, presumably has affected their journalistic work.