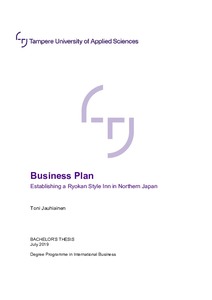 Jauhiainen, Toni
All rights reserved. This publication is copyrighted. You may download, display and print it for Your own personal use. Commercial use is prohibited.
Näytä kaikki kuvailutiedot
Julkaisun pysyvä osoite on
https://urn.fi/URN:NBN:fi:amk-2019081117780

The objective of this thesis is to create an initial business plan for an inn in Japan, which is designed with the theme of Japan’s Shōwa era (1926-1989), and to understand the industry and market in which an inn like this will operate. This objective is reached by combining the theory learned during the Degree Programme in International Business with results of research.

The business idea comes from the author’s interest in inn-keeping in Japan and in the popular culture and photography of the Shōwa era, especially its latter half from the 1960s to 1980s. The inn is a mix of the traditional Japanese inn, or ryokan, and a more modern guesthouse, and will have a café space which hosts occasional photography exhibitions.

Both primary and secondary research was conducted to find the answers to the main questions concerning the establishing and survival of an inn in Hirosaki city in the northern Aomori prefecture in Japan. The findings show that the number of foreign tourists in Japan is in fast rise and this trend is forecasted to continue. The whole northern Tōhoku region had a bad reputation after the 2011 Great East Japan Earthquake and the disasters that followed it, but recently the region has seen more visitors than before those tragic events. The situation is starting to look favourable for accommodations.

This business plan will be the basis for establishing a unique type of business in Hirosaki. Using the principles of experience economy, a full Shōwa era themed experience was designed in order to differentiate the inn from its closest competitors and offer a unique option for both overnight guests and daytime café customers.