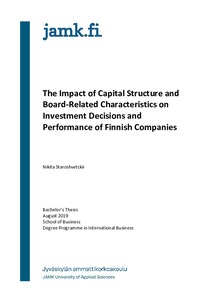 Staroshvetckii, Nikita
All rights reserved. This publication is copyrighted. You may download, display and print it for Your own personal use. Commercial use is prohibited.
Näytä kaikki kuvailutiedot
Julkaisun pysyvä osoite on
https://urn.fi/URN:NBN:fi:amk-2019081517861

The aim of this study was to examine the impact of capital structure and board-related characteristics on investment decisions and performance of the company. The analysis of secondary company-provided data was performed on information dating from 2014-2018. The main objective was to find out the connection between the boards, investments, capital structure, and profitability.
Secondary numerical data was collected from annual, financial, corporate governance, and remuneration reports of the companies. With the usage of SPSS software descriptive, correlational and multivariate ordinary least square analyses were conducted. Descriptive statistics provided an overview of the main variables’ characteristics. The correlation test enabled to tracking of association levels between the two variables. The ordinary least square analysis outcomes demonstrated the extent of a set of independent variables’ impact on the chosen dependent ones. The described methods allowed the author to answer the research questions and test the proposed hypotheses.
The empirical findings answered all the research questions. The debt-to-equity ratio had a negative effect on the operating profit ratio and no effect on the sales revenue. The amount of total assets, share ownership by the board, and education level had a positive influence on the debt-to-equity ratio. Board size and independence of the board had a negative influence. Sales revenue had a positive effect on equity financing. Investments had no influence on the capital structure. Incentive-based pay to the CEO and a board with many members were positively related with the performance measures of a company. Share ownership by the board had no effect on the performance of the company but had a positive impact on the amount of investments. The education level of the board was positively associated with the current investments.