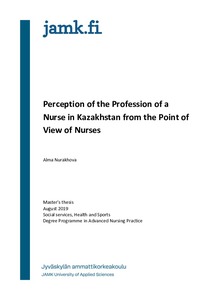 Nurakhova, Alma
All rights reserved. This publication is copyrighted. You may download, display and print it for Your own personal use. Commercial use is prohibited.
Näytä kaikki kuvailutiedot
Julkaisun pysyvä osoite on
https://urn.fi/URN:NBN:fi:amk-2019081317807

Background. In Kazakhstan there was an insufficiently productive organization of nursing services, due to the incomplete used of nursing staff and the domination of the doctor over the nurse. The process of preparing nurses did not meet European standards. There was a lack of a regulatory framework for the implementation of nursing services.
Objective. Describe how the nurses in Kazakhstan evaluate the image of nursing in present and in future.
Methods. Quantitative research approach was employed, and an electronic questionnaire was used for data collection. The participants consisted of 318 nurses. The first questionnaire -The Perceptions of Professional Nursing Tool and the second questionnaire - the Nursing Image Questionnaire. The data was analyzed by using descriptive statistics. Open-ended questions were analyzed with thematic analysis. Results. Survey participants saw existing barriers to the development of the nursing profession in Kazakhstan in the future because nurses received inadequate salaries, had an insufficient degree of autonomy, and were too busy at work. Therefore, when examining a goal such as describing the enablers of development of nursing profession in future in Kazakhstan, it was necessary to emphasize that in the country there were potential opportunities for the development of nursing in the future. To this end, reforms were already being carried out in medicine that set themselves the task of improving nursing. For example, the introduction of the post of extended practice nurses was relevant. In general, nurses were quite positive about the image of the nursing profession in Kazakhstan now and in the future.