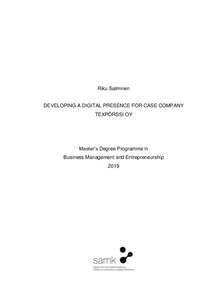 Salminen, Riku
All rights reserved. This publication is copyrighted. You may download, display and print it for Your own personal use. Commercial use is prohibited.
Näytä kaikki kuvailutiedot
Julkaisun pysyvä osoite on
http://urn.fi/URN:NBN:fi:amk-2019090918311

The case company is a local, family-owned company which sells clothes for men and women over the age of 40. The idea for the project came from the need to serve customers better, as customers are nowadays accustomed on searching information and shopping experiences online. Additionally, it could be the starting point of a new revenue stream for the company, as the company has only two stores in the Satakunta region.

Primary data was collected throughout various conversations, and a single thematic interview was made as well. The person interviewed is an employee in a local company which sells outdoors, hunting and fishing equipment, mainly online. The thematic interview was done to gain more insight to potential problems concerning the launch of the web store, social media usage and profitability.

The project itself was successful in launching the company’s Facebook page and web store. Continuous development on both must be done after this project has ended, as customers demand more content and experiences. The profitability forecasts made in this thesis will also be current after the company’s web store has been open for a year, after which the company should make observations and implement changes accordingly.