How transnational Living Labs can help SMEs to internationalize? 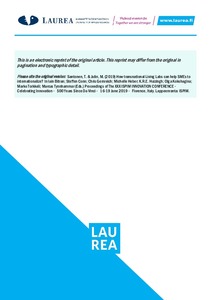 Due globalization there are increasing opportunities for SMEs to pursue international markets. Transnational Living Lab (LL) approach has been suggested as a promising way to help SMEs to pursue in international markets. However, what kind of services SMEs are expecting from transnational LLs is less clear. By conducing 82 semi-structured open-ended interviews among health and wellbeing SMEs from eight different Baltic Sea region countries, a typology for transnational LL-service needs is defined. As a result of a conventional content analysis, twelve main needs were identified. By far the most popular LL need was testing service. The second most popular need group was formed by eight equally important services, which origin can be linked to the commonly known internal barriers of SME internationalization. Suggestions for key characteristics of transnational LL concept are proposed.