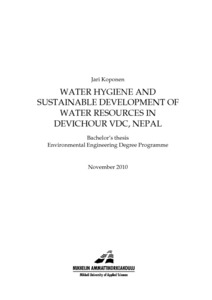 The main aim of this bachelor’s thesis was to research and clarify the overall situation of drinking water and its related issues in Devichour VDC for project cooperators CODEF and KEMA in Livelihood improvement and environment-project. Aims also were to research possible options for improvement of the drinking water quality, to examine drinking water related diarrhea cases and other related diseases in the area, as well as research the relation between diarrhea occurrence versus dry- and monsoon season. Also to accompany Devichour to a more sustainable base regarding water resources and consumption, by researching viable options for water purification, as well as pursue the ways to enhance water management by local contribution. Main reasons for the study were, as most of rural areas in Nepal, that Devichour VDC was being reported to have plenty of drinking water related diseases, diarrhea amongst them. Diarrhea in rural areas is linked to poor sanitation facilities, agriculture, and with lack in common drinking water hygiene.

The research for this thesis was conducted in Devichour VDC in Nepal that lies about 20 km east from the capital Kathmandu during the period of three months from May to August 2010. During that time was carried out sampling of drinking water sources and water sample analyzes in Devichour VDC, most importantly for coliformic bacteria and Escherichia coli that are one of the most important markers for harmful fecal pathogens causing diarrhea. Also surveying local drinking water consumption habits and collection of relevant health data was performed in the local community.

The results for research show that poor sanitation facilities, habit of open-defecation and lack of general drinking water hygiene has big influence regarding the occurrence of diarrhea cases in the rural developing communities such as Devichour is. Results also show that amount of diarrhea cases are highly dependent on the season, especially on the monsoon season when there can be noticed an outbreak in diarrhea cases.