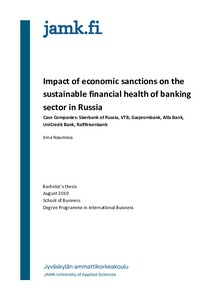 Naumova, Irina
All rights reserved. This publication is copyrighted. You may download, display and print it for Your own personal use. Commercial use is prohibited.
Näytä kaikki kuvailutiedot
Julkaisun pysyvä osoite on
http://urn.fi/URN:NBN:fi:amk-2019091818896

In 2014 the first economic and financial sanctions were applied by the US and EU against the whole industries and dozens of companies in the Russian Federation. These measures were aimed at demonstrating disapproval of the Russian Government's policies on the status of Crimea and the Ukrainian civil war. Panic because of approaching crises, especially in the financial industry, appeared immediately. The exchange rates were no more predictable, and the trust in banks from the population became questionable. The imposition of sanctions seemed to have an impact on the economy. The motivation to study the case of sanctions against the banking industry can be explained, firstly, by the high importance of a healthy financial system for the economy, and, secondly, by the growing tendency to include sanctions in the "game."
The objectives were to discover and estimate the influence of sanctions on the banks of systemic importance and the banking system of Russia. This qualitative research included a multiple case-study and a comparison of six banks out of which half were under sanctions. The financial stability of the banks for the post-sanction period from 2014 to 2017 was assessed according to the methodology of CAMEL. The method included the assessment of the following components: capital adequacy, assets, management quality, earnings, and liquidity. We paid particular attention to the liquidity indicators since the most significant measure of the entire sanctions package was restricting access for banks to be financed from abroad.
There were no severe discrepancies between the results of the sanctioned and non-sanctioned banks. We did not find any significant deterioration in the financial situation of the sanctioned banks either. The study revealed that during the period under review, the Russian banking system showed resilience and adaptability to the sanctions. The sanctions were point-like and did not undermine the general condition of the banking sector and individual banks.